Join Kegs/Chuggers
Get In Touch

Welcome to the Kegs Softball Club

Looking to join a team? Send us a message on our contact us page.

TL;DR - adding a third team, going international, more softball please Well, the 2022 season was so much fun that the Kegs Softball Club decided that the only answer was MORE SOFTBALL PLEASE.   After adding 19 new members last year plus a few more joining us...

END_OF_DOCUMENT_TOKEN_TO_BE_REPLACED

2022 was a very successful season on multiple fronts.  In terms of membership, we had a huge influx of new players thanks to ongoing communications via Facebook groups in Dublin as well as word of mouth from our existing members from 2021. We did lose 5 regular...

END_OF_DOCUMENT_TOKEN_TO_BE_REPLACED

The Triumphant Return of Kegfest

It was a mild, dewy Saturday morning in Ballsbridge.  The birds were chirping, the trees were rustling in the wind, and deep in the bowels of the Wanderers Rugby Club house preparations were being made for a day of softball, charity, and pints. KegFest had laid...

END_OF_DOCUMENT_TOKEN_TO_BE_REPLACED

TL;DR lots of jelly shots and the Kegs defend their Pink Blitz title from 2019 After two years in a covid-induced hibernation, the 22nd annual Pink Blitz returned in all its glory this year as 9 teams from across the island survived the battle against a never ending...

The Legend of Kegs Softball

Partially based on a true story, forgotten over a 30-year period.

The genesis of the Kegs dates back to Pat Burke’s 21st birthday in 1990, where a game of softball was played in his front garden in Cahir, with a Wavin pipe and a tennis ball.

Tommy Kinsella then produced some Budweiser bats and gloves. Games on Thursday evenings at UCD commenced, leading to the first college team.

The group evolved, and after a few too many pints in the Burlington hotel, decided to enter the league in 1994, thus creating the first league-official softball team. The name was chosen in founding member Niall Ennis’s kitchen, after a not-so-tough choice between ‘The Babes’ and ‘The Kegs’ – and so Kegs Softball has blossomed and grown ever since! 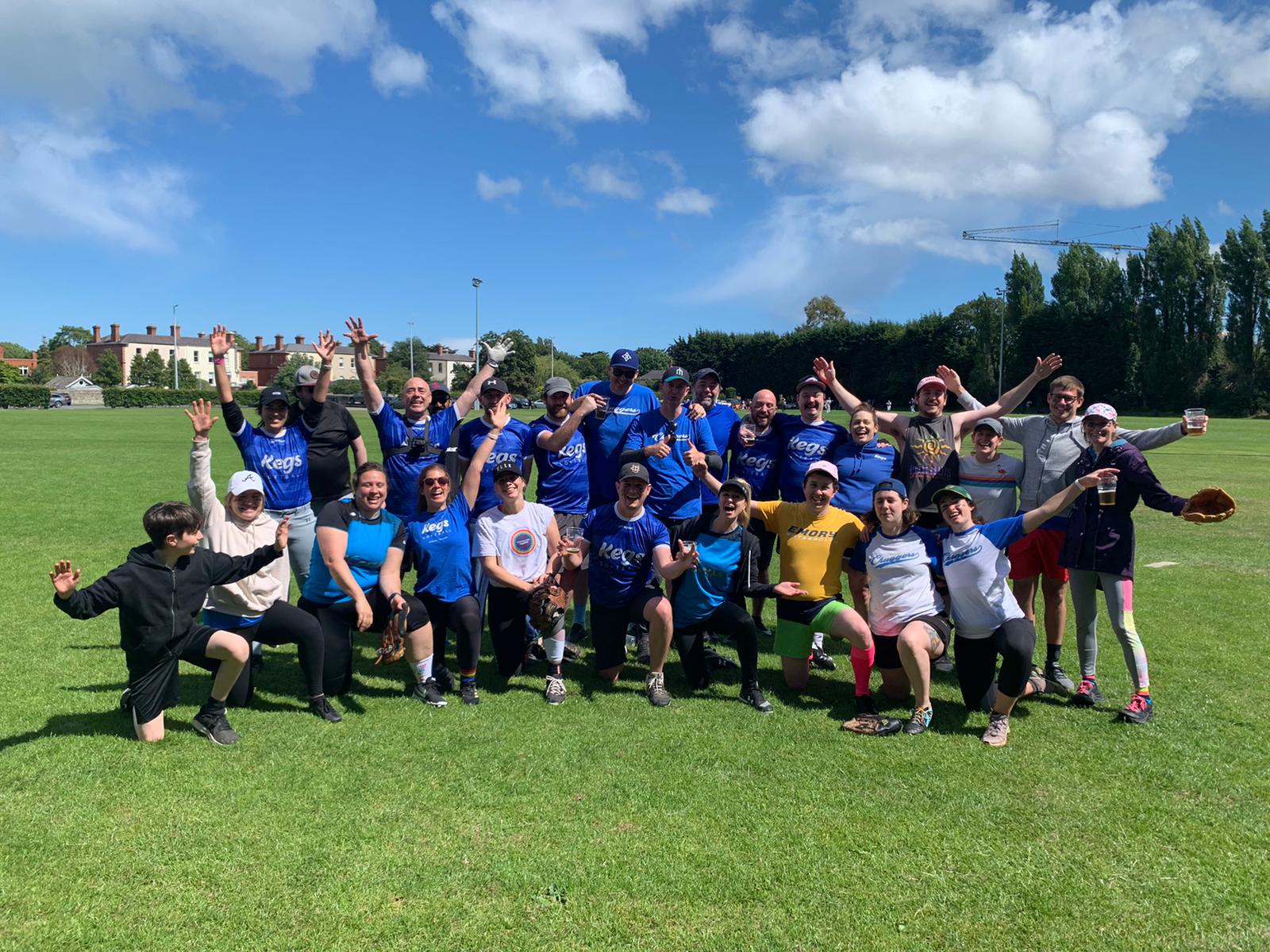 The Kegs are a co-ed slowpitch team, who compete in the Premier League of Softball Leinster. The Kegs are a social and recreational, yet competitive team, with a lot of incredible men and women! 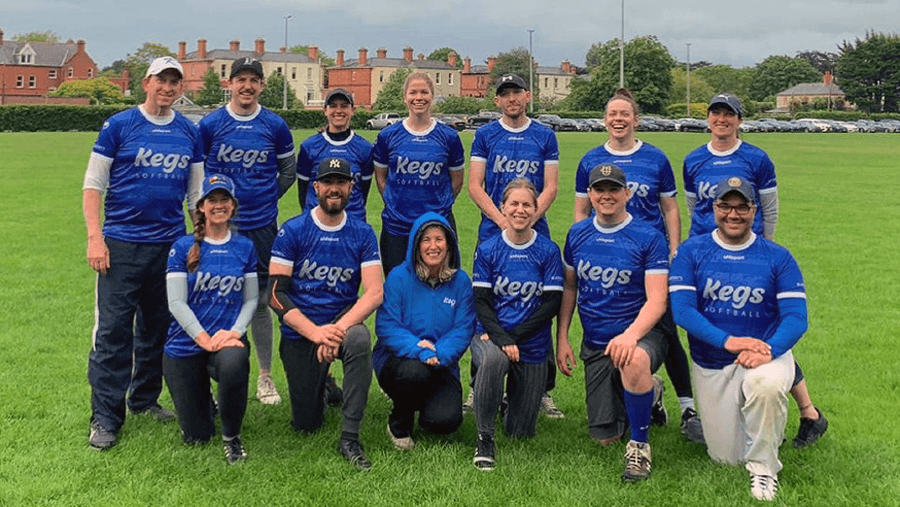 The Chuggers are a co-ed slowpitch team, competing in the Division 1 League on Wednesday evenings. You won’t find a more supportive, fun and talented group of folks than the Chuggers. 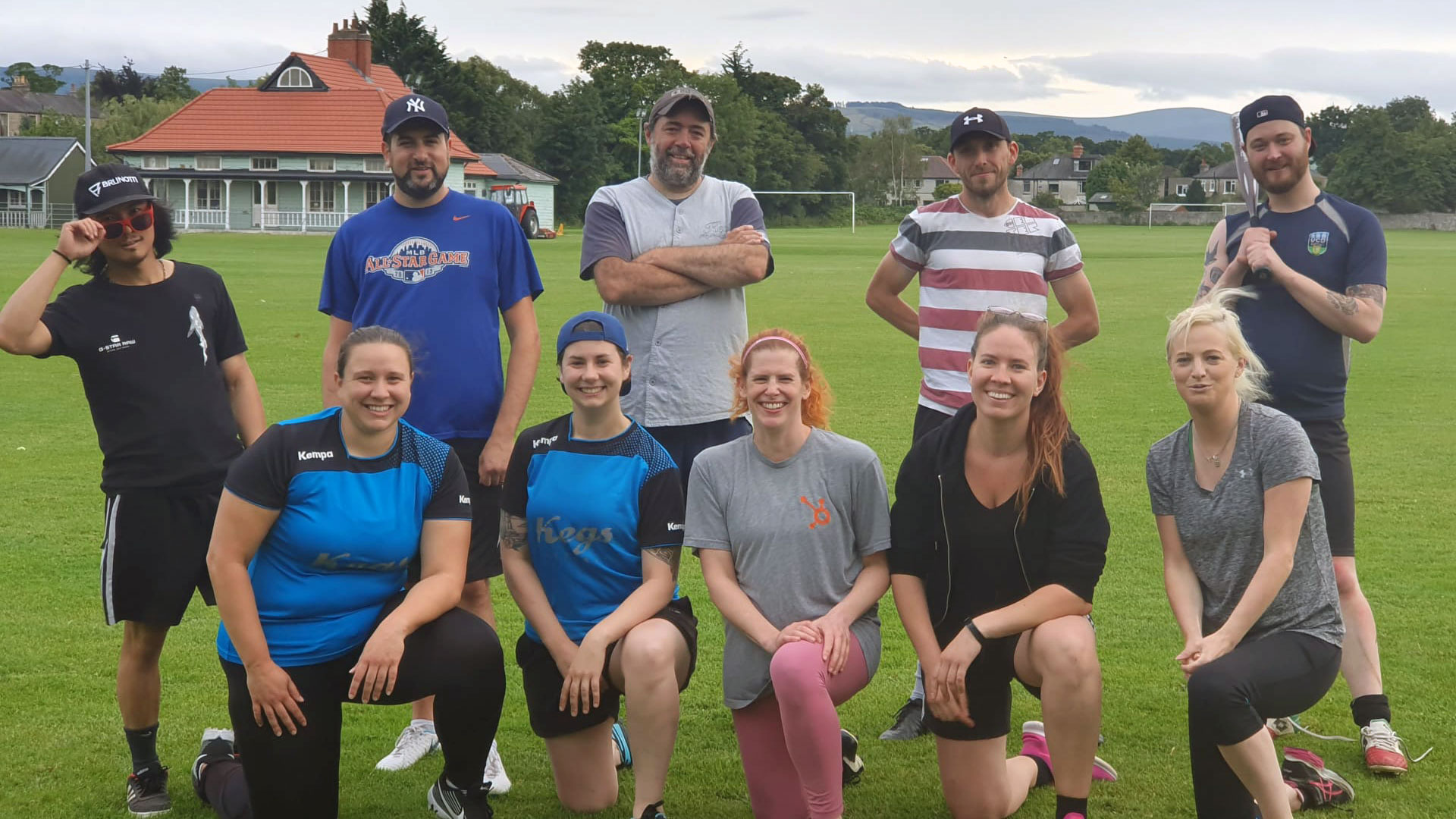 The Brewers are our newest team and competes in Division 3 of the Softball Leinster league. The Brewers are a fun and welcoming bunch looking to grow their softball skills, and have a great time while doing it.

Part of the Dublin Softball Community since 1994

Kegs Softball has a long track record of the promotion of softball within Ireland, as well as the development of players, their skills, and the community as a whole. We enjoy getting together for the love of the game, as well as some of our social and charity events.

Our Club Is Our Happy Place

Our club is an equal and inclusive place, that knows and appreciates the value of each of our players. We love meeting on the pitch, or in the pub, sharing our lives and experiences together. 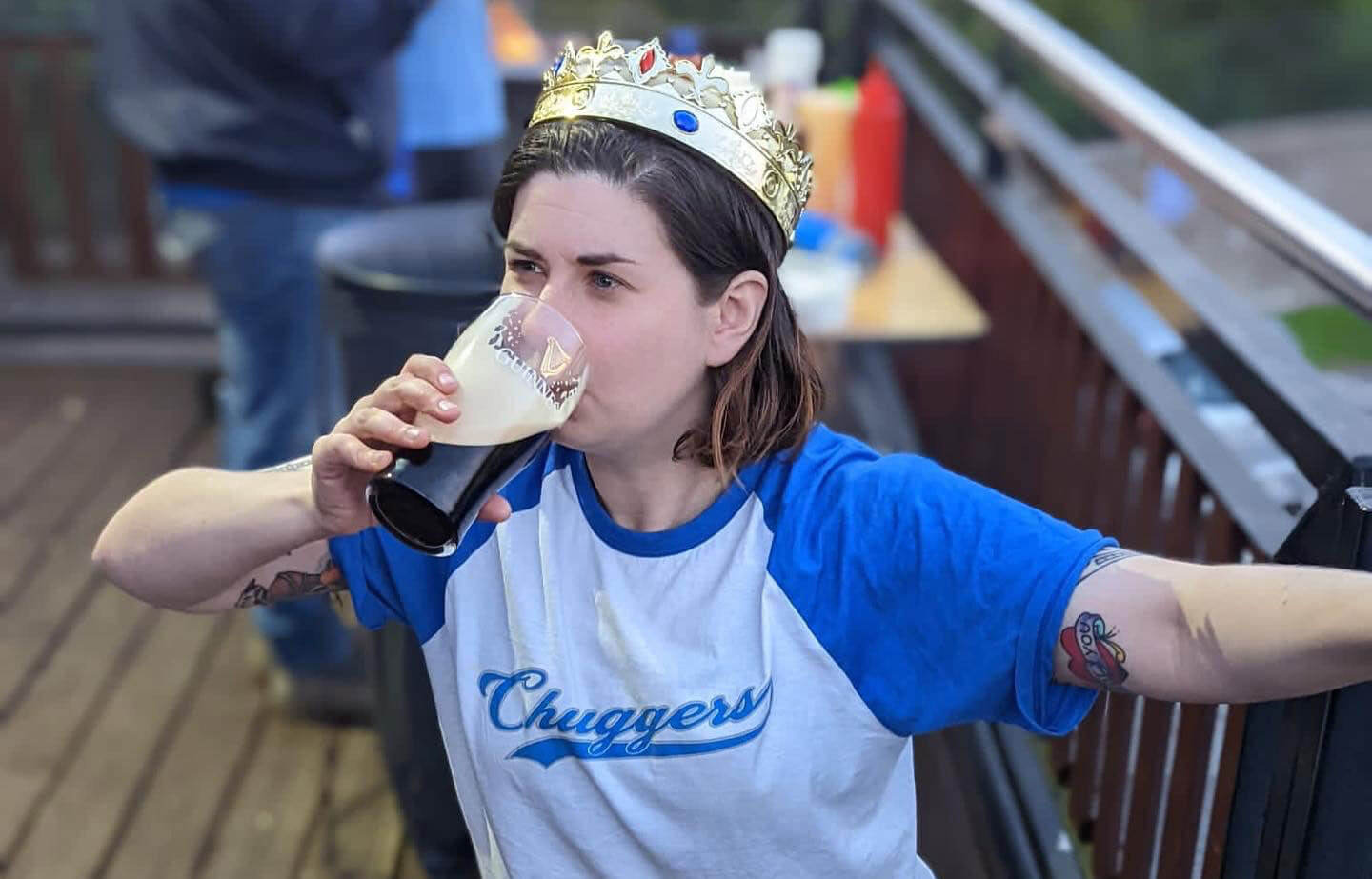 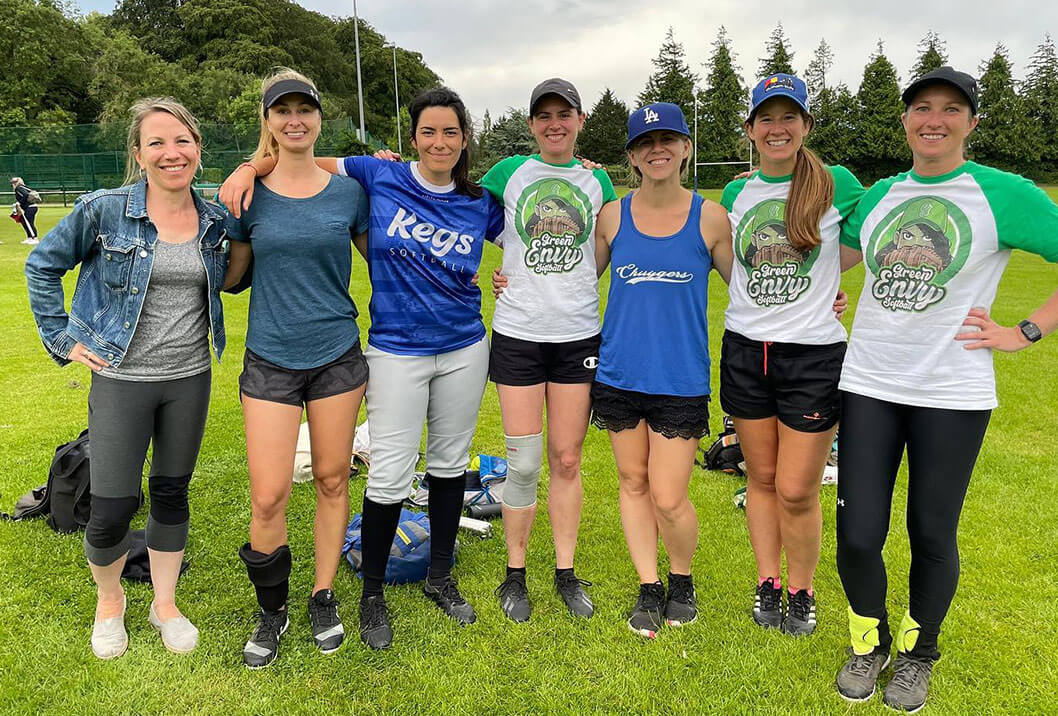 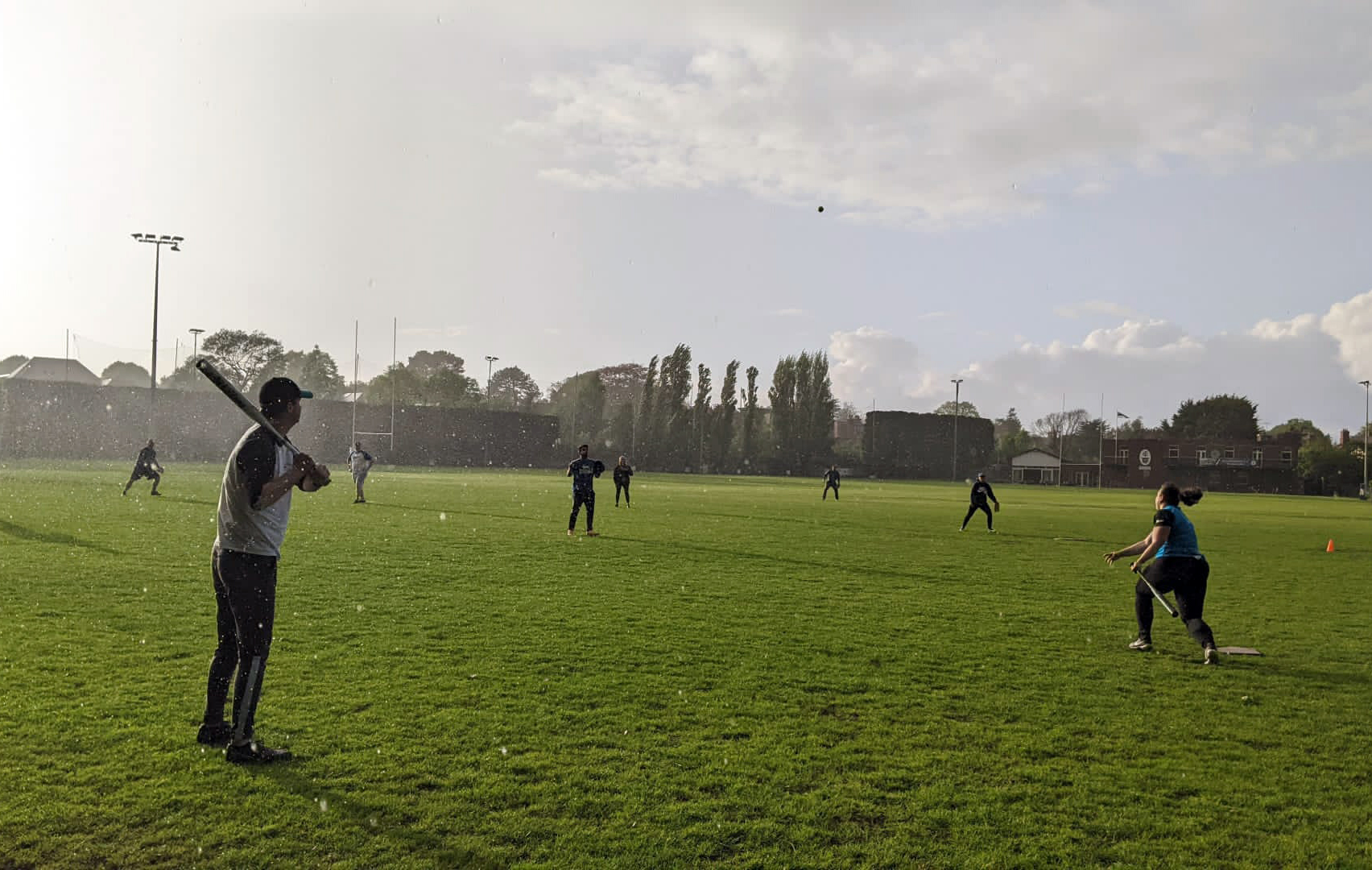 Get In Touch With Us

Want to Join the Club?

Interested in softball? We want to meet you! We’re an inclusive club who welcome players of all backgrounds and abilities. We’re here to help you navigate which team you’re a good fit for, improve your softball skills and, most importantly, have fun – together!

Get Involved
We use cookies on our website to give you the most relevant experience by remembering your preferences and repeat visits. By clicking “Accept All”, you consent to the use of ALL the cookies. However, you may visit "Cookie Settings" to provide a controlled consent.
Cookie SettingsAccept All
Manage consent

This website uses cookies to improve your experience while you navigate through the website. Out of these, the cookies that are categorized as necessary are stored on your browser as they are essential for the working of basic functionalities of the website. We also use third-party cookies that help us analyze and understand how you use this website. These cookies will be stored in your browser only with your consent. You also have the option to opt-out of these cookies. But opting out of some of these cookies may affect your browsing experience.
Necessary Always Enabled
Necessary cookies are absolutely essential for the website to function properly. These cookies ensure basic functionalities and security features of the website, anonymously.
Functional
Functional cookies help to perform certain functionalities like sharing the content of the website on social media platforms, collect feedbacks, and other third-party features.
Performance
Performance cookies are used to understand and analyze the key performance indexes of the website which helps in delivering a better user experience for the visitors.
Analytics
Analytical cookies are used to understand how visitors interact with the website. These cookies help provide information on metrics the number of visitors, bounce rate, traffic source, etc.
Advertisement
Advertisement cookies are used to provide visitors with relevant ads and marketing campaigns. These cookies track visitors across websites and collect information to provide customized ads.
Others
Other uncategorized cookies are those that are being analyzed and have not been classified into a category as yet.
SAVE & ACCEPT
Powered by